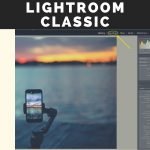 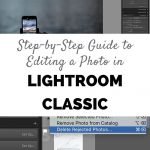 The journey your images take once they enter your digital workflow doesn’t end with organization – that is only the beginning.

Making the most of your captures involves development, a process as old as photography itself. Any kind of digital post-production tends to make people think of Photoshop and professional retouchers taking what the lens saw and pushing it past natural.

The important thing to understand is that a camera doesn’t see the world in the same way that your brain does. We see in differences. How different one color is from another, or how much brighter one thing is than something else. In the old days, decisions like those, which alter how we view the final image, were made with chemicals, and changes to the time film was exposed for.

Now, it’s all done in software – at first, in your camera, so you have a preview of what the final picture might look like, and then in Lightroom Classic, where you are free to massage those options until what you see on the screen matches what you saw through your lens.

For now, let’s develop a single picture. Select it, and hit ‘develop’ on the top right and the workspace will change, opening up all the controls you need.

Cropping is the first tool on the way down, just underneath the histogram (a little button that looks like a rectangular grid). Not every image needs to be cropped, but you don’t always have the lens length to get quite as tight as you might want, and many photographers intentionally ‘pad’ their shots as a safety measure. You can always crop an image, but anything out of frame is lost forever, after all.

The cropping tool works the same as in every other piece of image editing software, and it is so intuitive there aren’t really any secrets to its use. One important thing to remember is that, in Lightroom, cropping is a non-destructive process, so it’s risk-free; there is no harm in trying out different compositions from the same picture.

All light has a frequency, and that frequency affects its warmth. Different light sources have different frequencies – if you’ve ever looked at a photo taken inside and it’s had a yellowish cast to it, or a scene outside has seemed blue and sterile, that’s white balance at play.

Our brains do a great job of compensating for this – white tends to look white whatever the light says. But a photograph is only a part of what we see, so we adjust for the light of the room we’re in, not the light in the scene.

Fortunately, this isn’t difficult to fix, and Lightroom Classic includes some features that can make it even easier, if you need them.

In the first panel, you’ll see the letters ‘WB’ for white balance. Here you can select a preset, such as daylight, fluorescent and even auto. Most of the time one of those (especially auto) will be exactly what you need. If not, the ‘temp’ slider can dial in just the right amount of warmth – your eyes will know when it’s just right.

You might have also noticed an eyedropper icon – this is a tool that lets you select a white-reference in your image. That’s anything with a perfectly neutral color in the real world. Knowing that spot of the picture shouldn’t be warm, or cold, Lightroom can calculate exactly what the white balance should be.

Most often, I use the eye dropper tool and then adjust manually (shows up as Custom), but you should play with all the tools to see what works best for you and your images!

For the image above the White Balance shift was gradual, from 6200 to 7200. Do you notice the difference? Hint: It mostly takes place in the water.

Exposure and contrast, highlights and shadows

Exposure is just what it sounds like – how bright the photograph is. This is worth playing with, especially for RAW files, which might contain details you can’t see without moving the slider. Remember to look at the histogram to make sure you aren’t clipping out your photograph! Anything past the edges of the histogram will be washed out.

On my Canon DSLR camera, I exclusively shoot in RAW so that I always have the option to edit these details.

Contrast, highlights, shadows, whites and blacks are all tools for adjusting the relative brightness of parts of the image. They are very intuitive – contrast makes the whole image more or less extreme in terms of, well, contrast, while the others adjust the amount of light in the parts of the image to which they refer.

The exposure slider is always useful; the other controls (while very simple to use) can be replaced with another which, while a little daunting, ends up being faster and giving you more control with practice.

If you want a little guidance, you can always click the Auto button and see what that does for your image! Rarely do I use this function, but it is usually when I’m not sure which direction I want to go and that can give me an idea.

Whole articles have been written on the use of curves, and with good reason – it is one of the more powerful and flexible tools available.

The basic idea is each point on the curve represents a brightness. When you move that point up or down, you change every part of the image that was originally that brightness, giving it a boost or pulling it down.

That can be hard to wrap your head around, and the only way to get it is to play around with it and practice. But it will give you precise control of any part of the image, selected by brightness – just like all the previous tools in one, barring the exposure slider.

Most of the time pictures end up with a form of S-curve, which, unsurprisingly, looks like a diagonal ‘s’. This is the same as saying most images look better with a slight contrast boost!

The curves tool is incredibly powerful, and simple and fast to use once you have the hang of it. In the meanwhile, there is nothing wrong with using the sliders instead – it’s all about getting the image you want, not how you get there.

Lightroom’s sharpening options work just like Photoshop’s unsharp mask, in case you’re familiar with that tool. If you intend to work with Photoshop there really isn’t much point adjusting it at this stage, but if Lightroom is the last stop for your photo, it’s important to see how much sharpening you can get away with.

Sharper images are almost always better, but push it too far and the noise gets sharpened too!

And that’s it! Now you have taken a single image all the way through processing in Lightroom Classic. Though, doesn’t it seem a little tedious to have to do that for every image you take? It stands to reason that a lot of images taken at the same place at the same time could have similar processing applied to them, doesn’t it? And that’s exactly what I’ll talk about in the next article: Making Lightroom Work for You: Processing Pictures in Bulk.

Do you want to see a longer version of this video?

Welcome to a winter sunrise on the coast of North

Photography has always been in my life… but it r

Tonight’s sunset, as told by my Sony camera, DJI

Your daily dose of calm @rachelcarterimages 🎹