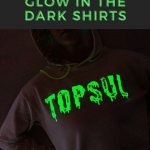 When I went in to the gym this morning and spotted a glow in the dark hoodie, needless to say I was definitely more interested in how I was going to photograph this amazing Topsul shirt than I was working out. I love a good challenge, and I had never photographed a shirt that glowed in the dark before. This is my idea of an exciting Saturday morning!!

Topsul Fitness owner, Lexi Pickle, makes her own t-shirts underneath her beach house… how cool is that? Wanting to ensure quality materials, she learned how to make her own. This glow in the dark series is perfect for October!

*This website contains some affiliate links for your convenience.

How I photographed a glow in the dark shirt

Normally I am all about natural light, but in order to photograph this glow in the dark shirt, I needed an interior room with zero light. Since we were in the Topsul Fitness gym, the only choice on such short notice was one of their bathrooms! Three women going into a single bathroom together with camera equipment? We probably drew a few looks from those working out, but I like to think this was the highlight of their workout! I don’t know about you, but entertainment is a huge bonus during any form of exercise for me.

The iPhone wasn’t going to cut it for these photos, so I used my Canon Mark D IV with the Sigma 35mm ART f 1.4 lens. I had planned to use my Canon 85mm f 1.8 lens, but after deciding to take these photos in a not-so-large bathroom, the 35mm was a much better choice.

I chose to use a fixed lens because I find they are easier to manually focus with. My experience has been that auto focus doesn’t work in the dark, and since we needed to turn the lights off to see the glow in the dark shirt, well I went straight to using manual focus on the lens. I can’t say the auto focus wouldn’t work as I didn’t try even try it… but my educated guess is probably not.

Any tripod should work, I’m quite fond of Manfrotto so I used a Manfrotto 055 Carbon Fiber tripod with a Manfrotto 405 Geared Head. I don’t work on a tripod as much as others, so I always recommend looking at editorial reviews (i.e. this one on Amazon). The tripod I use for travel and at the beach is a Manfrotto Befree travel tripod.

Using manual mode, I worked on the shutter speed first, but wanted to keep the ISO low. Aperture was my last priority for these images.

Since the glow in the dark shirt was on a model (Katie Guilliams) instead of stationary, a longer shutter speed wasn’t going to work. You can see the 25 second exposure is blurry because of movement:

However, after increasing the ISO and using a larger aperture (f/ 2), the 1/6 second shutter speed was much more sharp.

The right image is edited with a radial filter in Adobe Lightroom Classic to see the shirt a little more. I couldn’t decide which effect I wanted to go for!

Other than the radial filter, editing was minimal on these glow in the dark shirt photos.

January is my least favorite month.

Talk about #coldwatersurfing … today is freezing

Silhouettes are my second favorite. #topsailsurf